When Jesus was 30 years old, there was a man named John who lived in the wilderness and was teaching people about repentance, baptizing the people who believed him.  He was called John the Baptist. He taught “remission of sins” through the baptism of repentance.  This means that by being baptized, people could be forgiven by God for the wrongs they have done.

John wore rough clothing made of camel hair.  He ate locusts and honey.  John cared more about doing God’s work than about fancy clothes and nice food.  John had many followers, but he was also humble about doing his part of God’s work.  John said there would be one “mightier than I” who would come.  John baptized with water, but John said this mightier person would baptize with the Holy Ghost.

When Jesus was ready to start teaching people, he went to John the Baptist to be baptized.  John already knew about Jesus because they were relatives.  John’s work was to prepare the people to listen to the Savior by teaching the people repentance and baptism. John knew that Jesus was the Savior and that Jesus had no need to repent.  So John thought maybe Jesus didn’t need to be baptized.  But Jesus told John that he did want to be baptized “to fulfill all righteousness” which would show obedience to His Father’s commandments and would also show us an example to follow.

John baptized Jesus in a river called the Jordan River, and when Jesus came up out of the river, He saw the Holy Ghost come down.  God the Father (who is Jesus’ Father and our Heavenly Father) spoke and said that Jesus is His beloved Son in whom He is well pleased.

This was a really special time to know that God the Father and the Holy Ghost both witnessed and approved of Jesus being baptized. 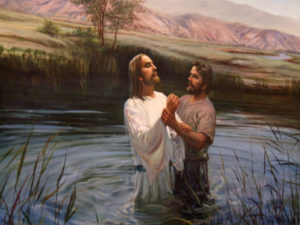 Previous:  The Birth of Jesus – Part 4, The Wise Men

Next:  Jesus Fasts 40 Days and is Tempted