After healing the man with leprosy, Jesus went into a city called Capernaum where a centurion came to him and asked Jesus to heal the centurion’s servant.

A centurion is a leader in the Roman army.  At this time, all of Israel was being ruled by Caesar Augustus in Rome.  The Romans had soldiers there to act as policemen and to keep things in order.  A centurion usually had 100 soldiers that they commanded.  It was an important position that was well paid.

The centurion said to Jeus, “Lord, my servant lieth at home sick of the palsy, grievously tormented.” 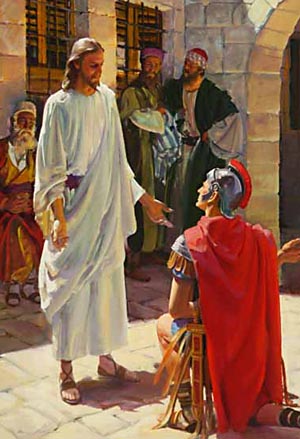 Palsy is a word that describes an illness that has some type of paralysis, sometimes with shaking; sometimes the illness means the person cannot move at all!  Anyone having this condition would have a very difficult life.  It seemed that the centurion had compassion for his servant and, though the centurion was not of the House of Israel, he believed that Jesus had the power to heal.

Jesus said, “I will come and heal him.”  Jesus understood the situation and saw the man had faith to have his servant healed.

What the centurion then said impressed Jesus.  The centurion felt unworthy to have Jesus in his home.  He knew that Jews had rules about being in homes of unbelievers and unrighteous people.  He thought Jesus would not want to come to his house.  But the centurion did know about authority, and he believed that Jesus had the authority to command so that things, even sicknesses, would obey.

The centurion said, “Lord, I am not worthy that thou shouldest come under my roof: but speak the word only, and my servant shall be healed.  For I am a man under authority, having soldiers under me: and I say to this man, Go, and he goeth; and to another, Come, and he cometh; and to my servant, Do this, and he doeth it.”

The man simply believed that Jesus could command and make things obey him.  This is simple, complete faith!  The bible says that Jesus marvelled, and said to those around him, “Verily I say unto you, I have not found so great faith, no, not in Israel.”

Then Jesus said to the centurion, “Go thy way; and as thou hast believed, so be it done unto thee.”  And his servant was healed in that same hour.

Next:  Jesus Heals Peter’s Mother-in-Law and Others